In a series of amazing photos taken by photographer Sebastian Lehrke at the Naboisho conservancy in Kenya, East Africa, we see the unbelievable moment when a brave zebra turned the tables on a cheetah and chased the cat into a bush. This brave move by the ungulate made him earn his stripes for sure.

In one of the photo sequences, a mother cheetah defends her three young cubs from a group of zebras that got too close. At first, the striped ungulates scattered and ran away as the cheetah’s mom ran after them. But not long after that, 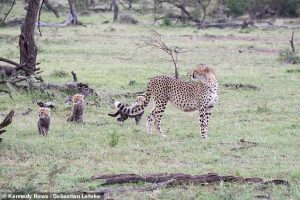 Even though this was an unexpected turn of events, the striped mammal suddenly turned around and started running towards the giant cat. The other animal’s sudden bravery seems to have scared the cheetah, who skidded to a stop and then ran in the opposite direction as the larger ungulate charged after her. 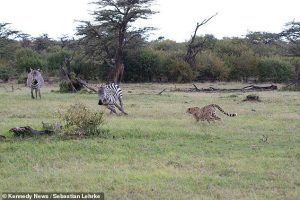 In this crazy scene, the zebra chased the spotted cat across the plains and scared her into the bushes. All while her three cubs watched in shock. The zebra was coming at the cheetah, so it hid in the bushes and didn’t see it until the striped four-legged animal walked away, looking like a winner. After this crazy chase, the cheetah cubs looked confused while one of them called out to their mother, who had hidden. 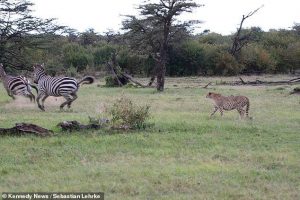 Zebras are interesting in many ways.

Zebras live in most of southern and eastern Africa. They like to live in grasslands without trees and savannah woodlands. However, Zebras and horses are in the same Equidae family but are different species. Because of this, their personalities are also different from horses’, which makes them much more dangerous and aggressive. Because of this difference in behaviour, horses and donkeys have been successfully tamed, but zebras are still mostly wild. They also have a ” ducking reflex,” which helps them avoid being caught in a lasso. 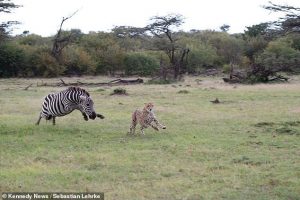 Since zebras have grown up in the harsh environment of the African plains, they have become tougher and more aggressive than their domesticated relatives. To survive in a harsh environment where big predators like lions, cheetahs, and hyenas are the norm, zebras have developed a high level of alertness and responsiveness that lets them run away when they see a threat. So, if they are captured, they also have an impressive way to fight back.

Any person who gets too close to them, is why they are not considered “people friendly.” 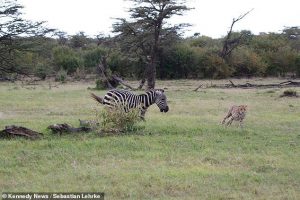 Zebras can run fast because the animals that eat them are also fast runners, but they are not the fastest animals in the savannah by a long shot. They run like horses because they push themselves forward with their back legs, but they are slower than horses. The speed of a zebra depends on what kind of zebra it is. The Grévy’s zebra (Equus grevyi) and the Plains zebra (Equus quagga) are thought to have the same top speed of 40–43.5 mph (64–70 km/h), while the Mountain zebra (Equus zebra) is thought to have a top speed of 35–40 mph (56–64 km/h). 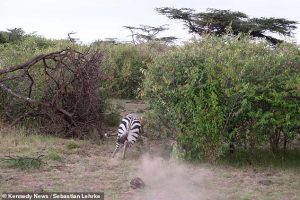 Lions, which can run as fast as 81 km/h, are the biggest threat to zebras. Even though most of their predators are fast, zebras have amazing stamina. For example, they can run at full speed for just over a mile and swim.

The cheetah is known as the fastest land animal in the world. It lives in open, dry grasslands in sub-Saharan Africa and in natural reserves or parks in eastern and southern Africa. Do you know? Small groups of them can also be found in the south of Algeria, the north of Niger, and Iran. Cheetahs are in the family Felidae, which also includes the lion, jaguar, tiger, leopard, snow leopard, and other big cats.

Impalas, grey duikers, kudus, gazelles, guineafowl, springboks, ostriches, jackals, hares, smaller antelopes, and even birds are among the animals they eat most often. If hunting alongside other cheetahs in a pack, they sometimes go after larger ungulates like zebras and wildebeests, but as a lone hunter, a cheetah will rarely pursue a zebra due to the significant difference in size between the animals.

When you look at a cheetah, you can see that it has a thin body, long legs, and an elongated shape. After such a sprint, its body goes through much stress. And the cat usually has to rest for up to 30 minutes before sprinting again. 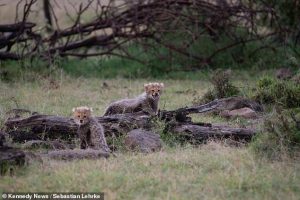 A cheetah can cover up to 7 m (23 ft) at full speed in one step. Since it takes three steps per second, the animal is in the air more than half of the time. This doesn’t come as a surprise that they get tired quickly. And thus need to conserve energy for much of the time. A study found that these cats only spent 12% of their day roaming their homes.

One thing about their bodies that helps them run so fast is that their claws don’t retract. This gives them more grip when turning corners or catching an animal, so they don’t slip. Also, their long, muscular tail acts as a rudder, which helps them make sharp turns when chasing fast-moving animals like antelope and hares.