Steve Harvey has a lot of names. He is a comedian, the host of a TV show, an author, and a dad. None of these things came easily to him. He used to be homeless, but now he’s one of the most loved celebrities in America.
Daytime TV isn’t the same without Steve Harvey. He beat all odds to become the host of “The Steve Harvey Show” and “Family Feud.” He has come a long way from his days as a homeless person.

Harvey’s trip began in the West Virginia town of Welch. Broderick Stephen Harvey was named after the “Highway Patrol” actor Broderick Crawford by his parents, Jesse Harvey, a coal miner, and Eloise Vera.

As a child, people called him “Va-Va-Vroom” because of how much he stuttered. But a local deli worker helped him by telling him to say hard words in his head at least three times before saying them out loud. 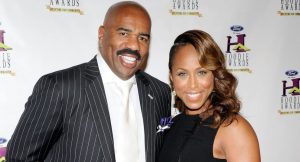 Then, his family moved to Cleveland, Ohio, where a street was later named after the famous actor. He went to Glenville High School, Kent State University, and West Virginia University for college.

Harvey was poor as a young man, so he did a lot of odd jobs to make ends meet. He worked as a mailman, a carpet cleaner, an insurance salesman, a boxer, and an autoworker at a Ford plant.

Harvey was unlike most artists who start working on their careers when they are young. He didn’t start doing stand-up comedy until he was in his 40s. When he got his first job, he was 27.

His wife, Marcia, did not like that he quit his job to try to be a comedian, so they broke up. Harvey took the chance, though, and got his first gig at the Hilarities Comedy Club in Cleveland.

He worked a few odd jobs, but his money wasn’t enough. He lived on as little as $50 a week. Because the rest of the money went to his twin daughters, Brandi and Karli, who are now 40.

During this time, Harvey would end up living in his 1976 Ford Tempo when he had gigs that didn’t pay for a place to stay. He also stole gas from gas stations to get to his comedy gigs.

He struggled to stay alive for three years, taking showers at gas stations and swimming pools. He lived mostly on bologna sandwiches and used his cooler as a refrigerator. But even when things were the worst, he kept going. He said this about the time:

“That was a bad time, and it hurt a lot. Everyone has a moment when they say, “This is too much” or “I can’t do this anymore.” I’ve had it more than once.”

He once sat down and started crying, but then he heard a voice tell him to keep going, and he’d get to places he’d never been before. He says it seemed like God was telling him not to give up.

He kept going and soon got a big job at “Showtime at the Apollo.” Work kept coming after that. He got a spot on “Cedric the Entertainer” and then a spot on a sitcom. He has never turned around.

Harvey’s story is a great example of how to go from being poor to being rich. He changed his life by working hard and never stopping because, as he says, he’s still trying to get away from being homeless.

The author of “Act Like a Lady, Think Like a Man” worked his way to the top and got the title “Hardest Working Man in Show Business.” He doesn’t seem to be slowing down any time soon. Harvey is now in charge of a multimillion-dollar business empire.

Harvey is thought to be worth $100 million. He got his money by being a stand-up comedian, a best-selling author, movie actor, and a radio and TV host.

Harvey is proud to have a close-knit blended family with a beautiful and hard-working wife, seven children, and five grandchildren when he’s not at work.

Like his success, Harvey’s love life hasn’t always been easy. He has been married and divorced three times. He got married to his first wife, Marcia, in 1981. At the time, he sold insurance.

The author of “Act Like a Success” was still trying to break into comedy, so he was on the road. It’s one of the reasons why they couldn’t make their marriage work. They stopped living together in the late 1980s, and their divorce was finalized in 1994.

They have three kids together: Brandi and Karli, who are twins, and Broderick Harvey Jr., who is their son. Since they broke up, Marcia has kept a low profile and made a name for herself in her field as an author. 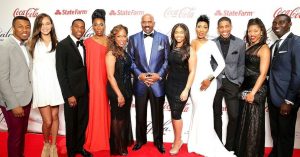 Before he divorced his first wife, Harvey started dating his second wife, Mary Shackelford. In 1996, they got married and had a son named Wynton. They were married for nine years before they split up in 2005.

After a very messy divorce from his second wife, Harvey fell in love again with Marjorie Bridges, now his third and current wife.

According to Harvey and Marjorie, who have been married for 15 years, it was love at first sight. Harvey knew he would marry Marjorie as soon as he saw her.

It was just as magical as the first time they met. Harvey took Marjorie to Cabo, Mexico, and hid a diamond ring in her dessert on their first night there.

Harvey took full custody of Morgan, Jason, and Lori, Marjorie’s children from her marriage to Darnell Woods, even though they were not his own.

Not only do they love and care for their seven children, but they also have five grandchildren. There are Jason and Amanda’s three kids in this group.