A seagull is ready to fly straight into the face of a polar bear, which has closed its eyes in preparation for the collision.

In settlement of Kaktovik, located on Barter Island, Alaska, Takayoshi Noda took a photograph of an incredible scene in which a bird and a bear come face to face.

When the polar bear had only a few meters to go before seeing the seagull, it closed its eyes in eager expectation.

But suddenly, the bird changed course, and it narrowly avoided colliding with the polar bear.

The man, who is 51 years old, said, “When I took this photo, the polar bear and seagull were only a couple of meters apart from one another.” 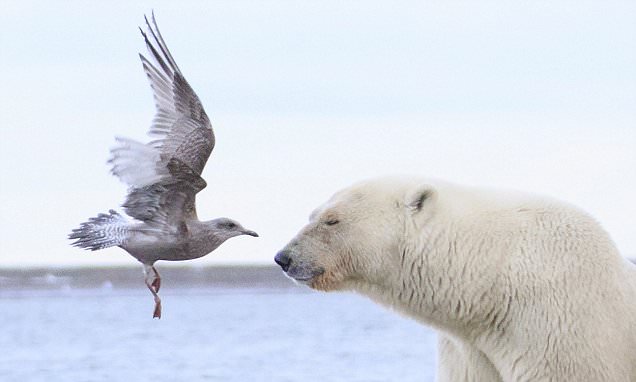 “As it got near to the polar bear, the seagull stretched its wings and slowed down, but as the bear closed his eyes, the bird swiftly reversed its course.”

“When I snapped the picture, I had the impression that I had captured an extremely funny moment on film.”

When the polar bear saw that the seagull was only a couple of meters away, it closed its eyes in eager expectation. 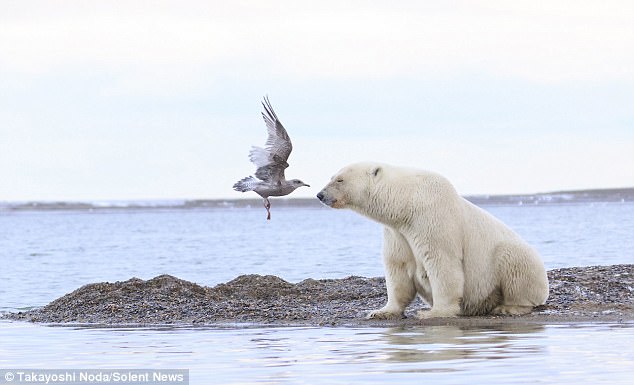 In this location, a polar bear was frequently surrounded by seagulls, which is natural, but the bears appeared to pay no attention to the birds.

“Sharing the benefits of nature, I was struck by the fact that people and polar bears can coexist in this area. This is a very significant relationship that has persisted since the beginning of time.