On Tuesday’s episode of “The View,” Joy Behar talked about her late father. She told her co-hosts that he didn’t think she was pretty.

Joy Behar seemed to try to blame who she is mentally on her late father on Tuesday’s episode of “The View” on ABC. She complained that it still bothers her that her father didn’t think she was pretty when she was a child, which was a long time since she was 80 years old.

But first, watch the video below to see when Behar talked about her father on “The View” a few years ago.

This started when co-host Sunny Hostin said that she has never been to therapy, even though she is “probably a lunatic most of the time.”

She also said, “I’m sure I need it.” (There’s nothing we can say about that!)

Hostin said that Behar always says, “Most of your bad behaviour as an adult comes from a bad experience you had as a child.”

That’s when Behar talked more than ever about her “childhood trauma.”

“It’s like putting a bandage on a cut: the cut won’t heal because it doesn’t get air. “You have to let the wound heal,” said Behar. “You also need to understand why your unconscious mind, not your conscious mind, is telling you what to do right now.”

As the conversation about blackface continues in the public sphere, Joy Behar is the latest celebrity revealed to have engaged in the racist practice in the past. Her public excuse was she was dressed as a beautiful black woman. Yep. That’s what she said. pic.twitter.com/x6BvWJyN4k

Some of Behar’s co-hosts didn’t agree with this, though. Sara Haines said, “What’s traumatic when you’re growing up could be very minor when you’re an adult.”

This was enough for Behar to put on her therapist hat and say that Hostin must be in a sibling rivalry herself and that she should “work on that.”

Behar then brought up how her father told her as a child that another girl was prettier than her, saying that “some things stay with you.”

Watch the video below to see the whole thing.

The late father of Behar

Gino Occhiuto was Behar’s father. He was a truck driver for Coca-Cola for many years and died in 1992. Three years ago, Behar used an old picture of her father to criticize her enemy Donald Trump, who she has been speaking out against constantly for years.

“This is my dad. He fought in World War II,” Behar wrote. “He fought, along with many other people, to keep our important democracy alive. Don’t let it slip away.” 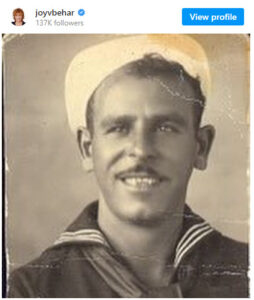 Behar used to talk a lot about her childhood.

Even though Behar complained about her dad on today’s episode of “The View,” she had said before that she had a good childhood. In fact, she once said that her outspoken liberal activism came from the fact that she grew up in Brooklyn with a strong Italian background.

She told Fox News, “I was loved, and no one ever told me to shut up, which is a blessing.”

Gino, I really appreciate that.

Behar is a typical liberal snowflake who blames her parents for everything, even though her father has been dead for 30 years. At 80, Behar might need to take more responsibility for her mental problems and stop blaming them on her late father.