Even though they were born long before the Industrial Revolution, Greenland sharks are still hunting in Arctic waters today. But as their icy home warms up, these mysterious giants don’t know what the future holds for them.

The Greenland shark is a very strange sea creature. Its flesh is poisonous, and what it eats is often strange and not very tasty. It is a strong hunter, but it also likes to eat dead animals. Reindeer and horse bones have been found in its stomach.

Its eyes are another thing that doesn’t make it look very good. Crustaceans that look like worms attach themselves to the corneas of sharks, making them almost blind. This doesn’t seem to be much of a problem for the shark, which also hunts squid at murky depths of up to 2,000 meters under the Arctic ice (6,500 feet).

The most interesting thing about this shark is that it has the longest life span of any vertebrate on Earth.

Putting a date on their eyes
Other sharks’ ages can be found by counting the growth rings in their vertebrae, which is similar to counting the rings of a tree. But the Greenland shark’s bones are soft and jelly-like, so they don’t tell us much about how it lived. Scientists didn’t find out how long it had lived until 2016 when they looked into its eyes.

Even though they aren’t very good for seeing, the shark’s eyes, like the eyes of other animals, have proteins that stay the same over time. Scientists took the eyes of 28 Greenland sharks caught accidentally by fishing trawlers and used radiocarbon dating to figure out how old they were.

Smaller sharks in their sample had been alive since the early 1960s when high levels of carbon-14 in the air caused nuclear tests to leave “bomb pulse” markers in their tissue.

But a mature five-meter-tall female was found to have lived before the nuclear age and well before the Industrial Revolution. Scientists think she was born between 1504 and 1744.

Melting ice is a threat.
This animal lived through a time when its kind was hunted for the oil in its liver, which was used to light lamps before electricity. However, it was caught in nets for other, more tasty animals. This is how thousands of Greenland sharks die every year, and the danger is getting worse as the Arctic waters warm, and the ice melts, letting commercial fishing into more of their habitat. 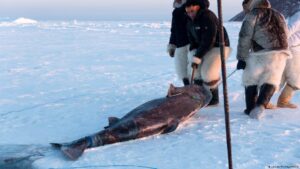 A Greenland shark is pulled across the ice by hunters.

Their slow pace of life doesn’t make things better. Because their slow metabolism adapts to their cold environment, they don’t become sexually mature until they are about 150 years old. This means that it takes time for new ones to grow when adults are killed.

The climate crisis has happened in the time it takes a Greenland shark to blink an eye full of parasites. If a new generation lives to keep the line going, it might live in a very different world from the one it is born in now.